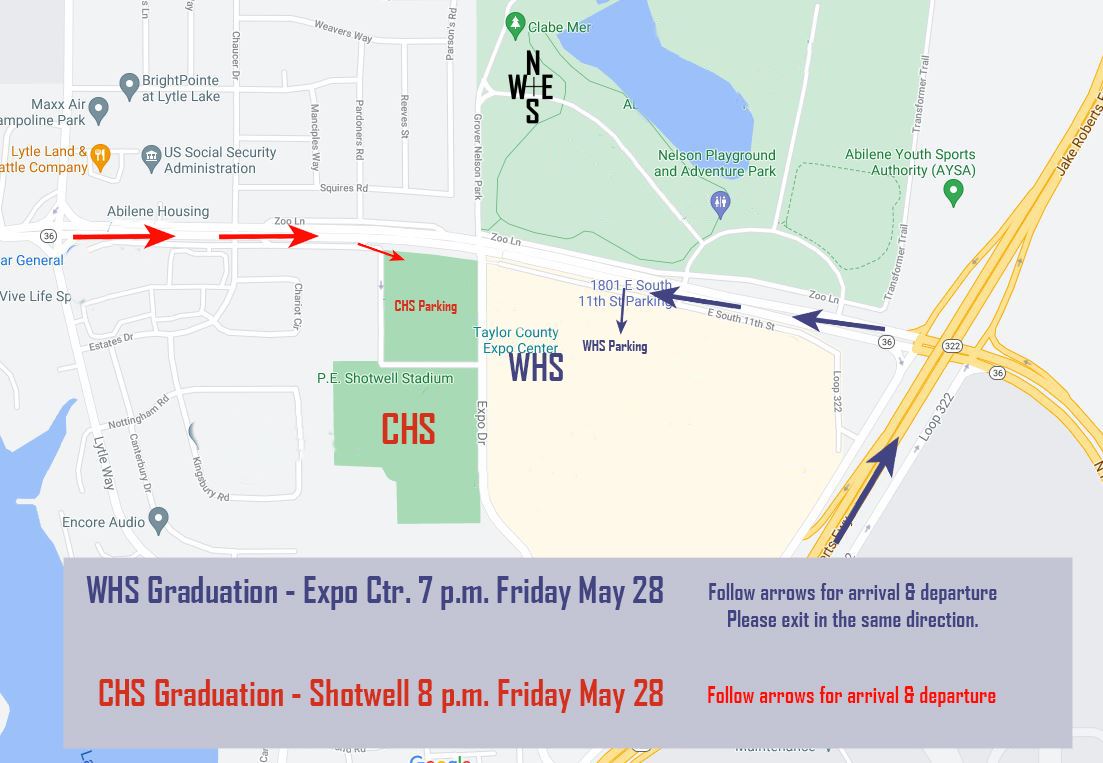 Traffic congestion is expected leading up to and after both of these events and with their close proximity to each other. APD will have officers helping direct traffic. We ask citizens to expect delays. The map included is the suggested course of entry and exit for visitors to each respective graduation ceremony.

Please review the provided map on the next page for suggested traffic direction.

AISD is working on a contingency plan should the graduation be rained out. AISD will notify parents of any changes. WISD is hosting the graduation indoors and therefore does not foresee any weather changes needed.

ABILENE, Texas (KTAB/KRBC) – From the classroom to owning a boutique. Giving back to the community is a priority for local entrepreneur Addie Helms who uses her boutique to give artists a place to display their work.

Helms grew up in Abilene and after years of teaching, she knew she wanted to continue giving back to the community that she loves.

Addie’s boutique may look like your typical store, but her retail space doubles as an art gallery– featuring local female artists who aspire for the kind of success she once strived for.

Every morning new artwork is promoted through a Facebook page and is available for sale.

Helms believes having the artist’s work on the walls gives them exposure to not only a different group of people but even adds to the ambiance of the store.

Earlier this week we heard that people with allergies will spend around $16,000 during their life dealing with them.  So here are five FREE ways to help deal with allergy season this year . . .

1.  Stay inside during the worst part of the day.  Midday and afternoon are usually when pollen counts are highest, so try to be indoors during those hours.

2.  Keep your car windows up.  Even though a fresh breeze can feel good, keeping the windows closed helps limit the amount of pollen you'll come into contact with.

3.  Wear your mask.  We all have a bunch of face masks lying around these days, and they actually do a pretty good job at limiting allergy symptoms when you're outside.

4.  Rinse off before bed.  Changing your clothes, taking a shower, and washing your hair after being outside limits how much time you'll spend with pollen on your body . . . and it also stops it from getting in your bed at the end of the day.

5.  Vacuum more.  Pollen and other allergens can get trapped in your rugs and carpets, and vacuuming frequently will get those allergens out of your house.

Would you pay someone to make all your decisions for you?  Or, even better . . . what if they paid YOU for the PRIVILEGE to make your decisions?  Well, it's a thing now.

There's an app called NewNew that lets you charge people $5 to vote and make choices for you . . . like what to have for lunch, or who to go out on a date with.  Then you just do whatever gets the most votes.

It's mostly meant as another way for influencers to monetize what they do.  And they can charge more for specific things.  Like a writer might charge $20 to name a character after you in their next short story.  Or you could come up with a prank, and pay a YouTuber to do it.

ABILENE, Texas (KTAB/KRBC) — More than 100 Abilene teachers were honored at AISD’s service and retirement awards ceremony Thursday, including two soon-to-be retirees who are leaving the classroom after 40 years.

“Today we celebrate all of the people that have 15, 20, 25, 30, 35, 40 years of service in the district, as well as our individuals that are retiring from AISD,” Superintendent Dr. David Young said at the ceremony.

A total of 142 educators received awards for their long service, but only two of them were marking 40 years with the district.

“That’s something I’ll never achieve. I’m not going to work another 34 years in Abilene, I hate to break it to you,” Dr. Young joked.

Stacy Evans and Lorry Spears came to AISD in 1981.

“The top song was ‘Physical’ by Olivia Newton John, and I’m sure Stacy Evans had that on play on his 8 track in his car,” Said head of AISD communications Lance Flemming.

According to Spears, days like these bring up both memories and realizations.

“I was thinking about that the other day, my very first group of kids was kind of a mixture. And one of them would be 55 years old now. What?” she says.

Classes, kids, and cultures have shifted during her tenure.

“Kids don’t even know what chalk is. An overhead projector, whats that?” Spears says.

Despite the pain of saying goodbye each year, Spears has gladly stayed with AISD, picking up some valuable advice along the way.

“Use your colleagues, work together, stay positive, and remember that this is your ministry. These kids need you,” Spears says.

No matter the subject or the decade, Spears says she sees a timeless curiosity in each and every child.

“Kids are kids, doesn’t matter if it’s in the 80s or now. They still need your love, still need your guidance and they still make me laugh. It’s just a good profession. I love teaching,” she says.

Spears says she’s looking forward to doing more volunteer work. It seems she’s not quite finished giving back to her community.

Knock on wood, it looks like we might actually get to have a real summer this year.  And we're not gonna waste it.

According to a new survey, 59% of people say they want to try something new this summer.  And here are the top 10 things on people's "summer bucket list" . . .

10.  Going to a national park or a monument.

Here's National Teachers Day by the numbers for you . . .

2.  92.4% of teachers spend their own money on things for their classroom or their students.

3.  Teachers make an average of 14% less money than other jobs that need the same level of education.

4.  The average retirement age for teachers is 59 years old.

5.  And 20% of public school teachers have a second job outside of teaching.