It's the world's largest amateur rodeo!

This year they’re starting something new on Monday the 28th. PBR Bulls Night Out!!

Here is the concert schedule:

Saturday, July 3rd, is a HUGE night with Kolby Cooper and Slade Coulter $25.00

Get your tickets NOW!!

They will be kicking off the 2021 Hometown Spotlight Events in Cross Plains, Texas.

Mark your calenders for June 26, 2021. They will be holding this event at Treadway Park located just off Hwy 36.

They hope to support this small community and the businesses within.

They will be hosting vendor booths, food trucks, a cornhole tournament and a kids area.

They will also have LIVE MUSIC with artist throughout the day.

Grab your friends and spend an evening by the creek filled with belly laughs and wine!

More than a dozen New York and L.A. stand-up comedians are currently on the road, sampling the local wines and providing the finest and funniest in comedy entertainment.

This stop is set to feature a lineup of 3-4 comedians whose credits include top festivals, TV and major club appearances.

This comedy tour takes top comedians who you've seen on TV and sends them out on the road to perform at wineries throughout the country.

Find out which wine pairs best with hysterical laughter when this tour hits The Winery at Willow Creek!

Tickets are $13 and can be purchased online at:

The official start of summer is this Sunday.  If that's not specific enough, the EXACT moment summer starts is 11:32 p.m. Eastern, 8:32 p.m. Pacific.

That's when the North Pole is at its maximum tilt toward the sun, making it the longest day of the year in the Northern Hemisphere.

Here are ten more facts for the start of summer...

1.  The term "dog days of summer" comes from astronomy.  Sirius is called the "Dog Star" and rises in late July.  In ancient Greece, the "dog days" meant the hottest part of the year.

2.  The world's largest scoop of ice cream weighed 3,010 pounds.  A company in Wisconsin pulled it off in 2014, and then used it to hand out free scoops all weekend.

3.  We tend to be happier in summer.  A study in 2011 found it's true by analyzing tweets from 2.4 million people.  They say it might be because there's just more sun.

4.  The Eiffel Tower gets six inches taller in summer, because the metal expands from the heat.

5.  Wham-O started selling Frisbees in 1957.  But the first frisbees were actually PIE TINS college students liked to throw around.  And it's also where the name came from.  They got the tins from the Frisbie Pie Company in Bridgeport, Connecticut.

6.  We'll eat around 150 million hot dogs on Fourth of July weekend alone this summer.  That's enough to stretch across the country more than five times.

7.  There are over 300 varieties of watermelon in the world.

8.  There's enough water in an Olympic-sized swimming pool to take 9,400 baths.  That's enough to take one bath a day for 25 years.

9.  Popsicles were invented by mistake.  Back in 1905, a guy in San Francisco left some sugary water out overnight, and it froze.  Then he realized it was delicious.

10.  Americans drink about three billion gallons of iced tea a year.  According to the national Tea Association, over 75% of all the tea we drink here is of the iced variety. 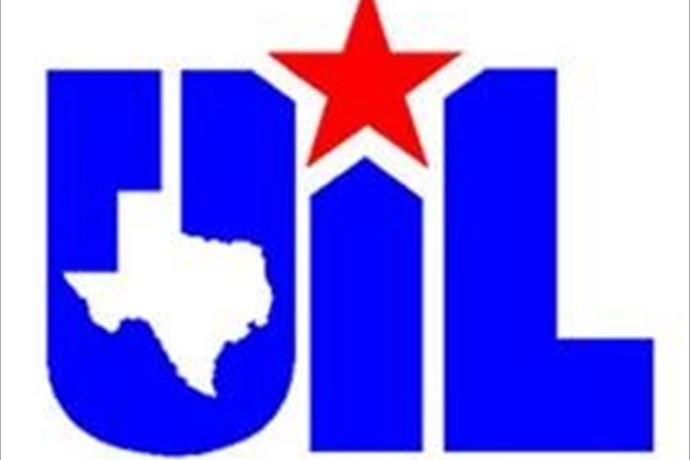 The University Interscholastic League voted on Tuesday to allow Friday night high school football games to be live streamed on the internet.

The proposal was voted in by a clear majority, but it was not a unanimous decision.

Livestreaming was banned by the UIL every year until the 2020 season because they saw it as necessary because of COVID-19.

Many districts created a rule that required schools to provide some sort of livestream because attendance was limited at most high school stadiums across the state.

Abilene ISD and Wylie ISD, among others, streamed the Abilene High, Cooper, and Wylie games in the 2020 season, so you should look for them to do it again in 2021.

Tickets are $15 and can be purchased with the link below!

In this survey on self-love, we're surprised ACTUAL self-love didn't make this list . . . as in the manual kind.

A new study looked at the top things people do when they're in a bad mood and want to feel better.  Here are the 10 short-term mood boosters people said work best . . .

1.  Eating something.  But not always something healthy.  Sweets are the #1 choice.

3.  Distracting yourself with a TV show or a book.

4.  Cooking something, or baking.

8.  Just going outside and getting some fresh air.

The "CMT Music Awards" is one week from today... and they're down to six finalists for Video of the Year.  Since the show is all about "fan voting" they're hoping you'll cast a ballot, or two. Here are the six V.O.Y. finalists:

•  "One Too Many", Keith Urban with Pink

•  "Hole in the Bottle", Kelsea Ballerini

You can cast your ballot now at vote.cmt.com. They're going to narrow that group down to THREE finalists, and will reveal them NEXT Wednesday at 10:00 A.M. The voting among those three will continue through the show that night.

Pizza Hut has been trying to take advantage of our '90s nostalgia with a marketing campaign called "NEWstalgia"... celebrating things like Book It pins and those tabletop Pac-Man games they had.  Here's their newest reboot...

Pizza Hut just announced they're bringing back a thin-crust pizza called "The Edge" that originally debuted in 1997.

The big selling point was that all the toppings went the whole way to the edge of the pie, so no crust.  Which might not seem like a huge innovation now... but it was apparently INSANE in the late '90s.

The pizza is made with their Thin 'N Crispy crust, which is the first type of dough they used at Pizza Hut in the 1950s.

They also brought The Edge back for a limited time in 2009, but it's been gone for over a decade.  And they say this one's a limited-time thing too.

I guess they're not that nostalgic about PRICE though. The original Edge pizza debuted for $8.99, and the reboot costs $12.99.  (That's actually slightly cheaper if you adjust for inflation though.  Here's a photo.) 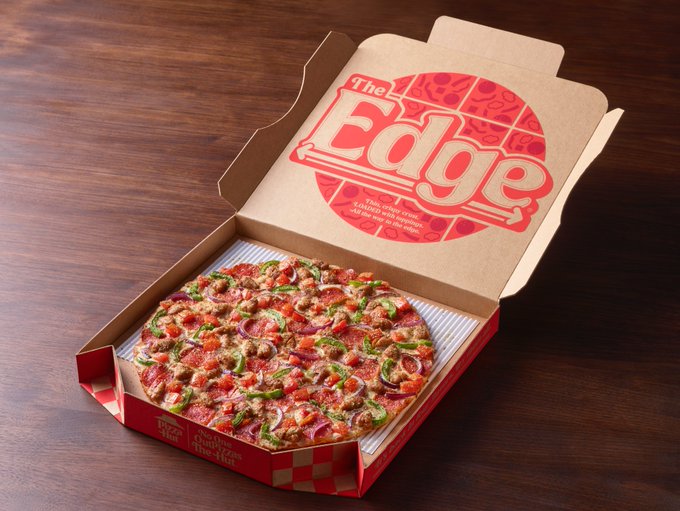