Posted About Two Years Ago by Jillian 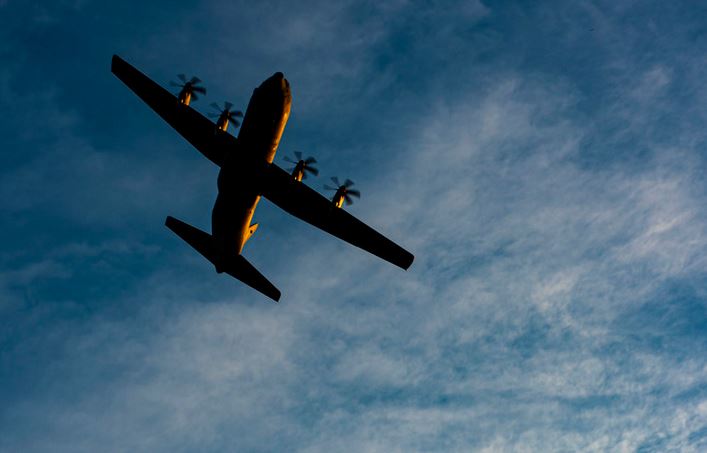 A C-130J Super Hercules flies over the flightline at Dyess Air Force Base, Texas, June 3, 2020. The 317th Airlift Wing recently finished the first round of the new 4/12 C-130 deployment cycle. The 4/12 deployment cycle allows an entire C-130J airlift squadron and their associated maintenance unit to deploy for four months, which allows Airmen a 12 month dwell time at home station before the next scheduled deployment. (U.S. Air Force photo by Airman 1st Class Colin Hollowell)

DYESS AIR FORCE BASE, Texas (Dyess AFB) — Since September 11, 2001, the 317th Airlift Wing has consistently deployed to Afghanistan and the Horn of Africa to support war efforts, humanitarian relief and, most recently, a global pandemic. The constant necessity for worldwide tactical airlift support keeps Airmen of the 317th AW and 19th AW from Little Rock Air Force Base, Arkansas, actively supporting efforts around the world.

All Airmen and aircraft from the 317th AW now have six-to-eight month dwell time before the next deployment. This will be the longest period of time that all Airmen have been at home station since the start of the war on terror.

Creating this time at home was an intentional shift away from a split-squadron “4/4” cycle that maintained a constant deployment-centered mindset.

“The 4/4 deployment cycle almost exclusively focused on counter-terrorism and counter-insurgency operations in east Africa and Afghanistan,” said Col. Jeff Menasco, 317th AW commander. “With the new National Defense Strategy that came out in 2018, the Department of Defense was asked to transition the focus to great power conflict.”

In September 2019, the 317th AW initiated a new deployment rotation cycle designed to deploy an entire airlift squadron and an associated aircraft maintenance unit for four months. This allows airlift and maintenance squadrons from both the 317th AW and the 19th AW up to 12 months of dwell time between deployments.

In order to transition from the 4/4 cycle to the 4/12, 317th AW Airmen conducted 60 day rotations to bolster the deployment gaps leading up to the new rotation.

“We were pushing a lot of people out there,” said Col. Don Vandenbussche, 317th Maintenance Group commander. “They deployed a little more frequently to get through that hump to offset all of the timings with the upcoming deployment cycle.

The extra efforts of the 317th AW Airmen that pushed into the 4/12 cycle was imperative to implementing the new deployment incentive.

“It’s important to recognize the Airmen and their families as we surged into the 4/12 deployment construct,” said Menasco. “We did not get a break, we did not take a knee and we deployed a lot. We deployed an entire squadron and the supporting AMU, then we sent the other half out the door and there was no break in between.”

“Full-spectrum readiness is the ability to be fully trained and confident for any fight we may have to execute,” said Menasco. “It’s having the confidence and training to operate in any and all environments.”

Having 99% of the wing at home station for an extended period of time allows 317th AW leadership to conduct extensive and thorough training throughout the wing.

“From a maintenance perspective, I have both AMU’s home so now when we train or do an exercise we can do it on a much larger scale,” said Vandenbussche. “We can get much more consistent training because everybody is here.”

Training and readiness is key, but providing Airmen the opportunity to seek personal growth, professional development and family balance will also benefit the 317th AW and its mission.

“I would define squadron vitality as the unit’s ability to focus on the Airmen as individuals,” said Menasco.

Having more stability at home station better allows Airmen and leadership to develop on personal and professional levels.

“This protected time will be great for the vitality of our Airmen,” said Vandenbussche. “They can now plan out their education, family involvement and their time off without worrying about the next deployment around the corner.”

Providing time for Airmen to focus on individual vitality plays a massive role in the wing’s ability to maintain mission readiness.

“The 4/12 deployment construct creates time. Time in and of itself doesn’t change anything but it gives you the capacity to change things,” said Menasco. “We will fill that time with readiness and vitality by focusing on the mission, our Airmen and their families.”